​State Line Drive was formed when twin brothers Mason and Micah Marrs from Missouri joined forces with brothers Joel and Jordan Mills from Kansas. These teenagers have been traveling across the Midwest ever since.

They have had the privilege of opening for national acts such as Billy Currington, Scotty McCreery, Parmalee, Gloriana, Mark Chesnutt, Keith Anderson and more. They have appeared on several Kansas City radio and television shows, and sang the National Anthem before a Kansas City Royals game.

While country music makes up the heart of their set, they throw in a great mix of pop and rock from the 80’s to today as well.

Their tight harmonies, high energy show and young image make them a hit with audiences of all ages. 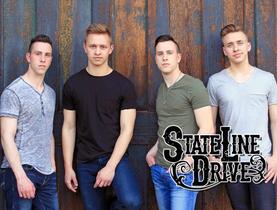