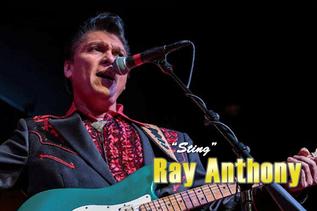 ​Fans of Ritchie Valens, Elvis, Buddy Holly and Jerry Lee Louis won't be disappointed as this exceptional, well-known performer puts on a one-of-a-kind show filled with some of the biggest hits from the 50s and 60s. This fun-filled performance will delight audiences of all ages with a rock 'n roll blast from that past that just can't be beat.

'Sting Ray Anthony's engaging stage presence and exceptional musical abilities will keep your eyes glued to the stage and his signature 'La Bamba' performance is the highlight of every show. A lively and entertaining performance, La Bamba is one show that will have you on your feet clapping and singing along.

Don't miss your chance to take a step back into the 50s and 60s with the multi-talented 'Sting' Ray Anthony and get ready to rock 'n roll.

'Sting' Ray Anthony is well-known for his superb tribute of Ritchie Valens and has been awarded a gold record by the Valens family for his efforts in keeping Ritchie's legacy alive. 'Sting' Ray Anthony has also performed at Dick Clark's American Bandstand Theatre in Branson alongside big names like Bobby Vee, Fabian, Shirley Alston Reeves, Little Peggy March, Bill Medley, Chubby Checker and Paul Revere and the Raiders.