​Living in the USA is the ultimate Linda Ronstadt Tribute featuring the unbeatable 60's band Paisley Craze fronted by Donna Lamoureaux.  Donna has been a professional musician for many years with talents in both singing and playing several instruments. Originally from New York, she has traveled the United States singing and playing with Show Groups such as Apple Band, an Atlantic City based Show Group. She performed, among others, tributes to the Andrew Sisters, the Supremes and Aretha Franklin.

Donna relocated to Florida, where she performed at Universal studios with an  a’capella group called The Hi Tones , where  she  continued to develop her musical abilities, Donna was also part of a Show group at Church Street Station in Orlando. She performed music in Tribute to the music from the Big Band Jazz and Swing era, as well as musical shows from the 60's to the 90s.

Donna relocated to Sarasota Florida where she was contracted for a year to sing Jazz at the Ritz Carlton. Now living in Sarasota, she continues to use her talents working with numerous local music groups singing all eras of music . She is known for her extraordinary vocal range, power and clarity, enabling her to sing many different types of musical styles.
Donna also writes her own contemporary Christian music and has finished her first CD called (Only Grace). She is in the process of finishing her second CD.

Paisley Craze and Living in the USA are available as a package show! 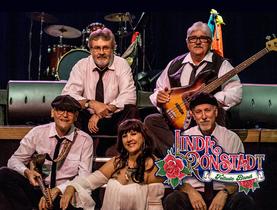