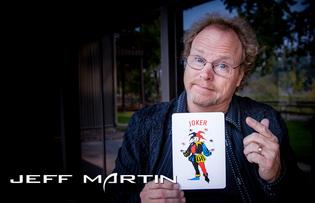 ​At the tender age of eight, a magician by the name of Chuck Jones, the Magic Man, performed at Jeff's school.  The following Christmas a 'magic kit' was found under his Christmas tree and the "die was cast, as Jeff Martin had discovered his passion.  He studied as a brisk pace at his local library, reading from cover to cover every book on magic he could get his hands on and then would come home and try his new-found knowledge out on his family.

As a teen he would sometimes perform at local community events and private birthday parties, honing his craft.  As he matured, he made the decision to become a full-time professional magician.  He knew the 'craft' of magic, but needed direction with how to be an 'entertainer'.  With the help of a dear friend, he learned ho to entertain and that was what was to truly be 'his passion'; entertaining.

Today, thirty plus years later, he's one of only about two thousand 'full-time' professional magicians.  He goes by the title, "The blond curly-haired Magician", as it appropriately describes his physical attributes.  But where he shines is in his ability to make people of ALL ages smile, laugh, giggle and simply marvel at the wonders of comedy magic with all of it's production, misdirection, bunnies and doves, and antics that make a quality show entertaining.

​​With his wife, Pam at his side and working behind the scenes, "Team Martin" has evolved from a 'local magician in Southern California', to a couple who spend the better part of 9 months annually traveling this beautiful land we call USA, bringing smiles and laughs to many hearts.  "That's why we do it!!", they both say.  "We love to make people laugh!  In a time of turmoil and uncertainty, our show lets you 'step-away' from all the 'stuff' out there and just remember what it's like to be a family and be together doing something fun, like going to a fair and sharing some cotton candy and watching a magic show!".  That's what it's all about!!