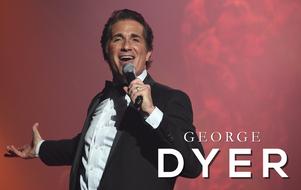 He first hit the operatic scene in 1996 with his professional debut at the New York City Opera, where he received rave reviews for his performance. He has also played Ralph Rackstraw in H.M.S. Pinafore at the Lincoln Center and has since continued to perform throughout the world. George has appeared as a soloist in concert with numerous symphony orchestras. He is sought after by several opera companies throughout North America.

His show will delight the guests as he creates a wonderful mix of Opera and Broadway favorites. He amazes the audience with his solo performance with all of the hit classic standards from across the decades, Love Songs, Gospel,and even a little country.

George has all the beauty of Prince Charming and a gift from God with his voice that will stir you to your feet one moment and have you laughing out loud the next with a hilarious comedic style all his own. George Dyer's Show will warm your heart and tickle your funny bone.