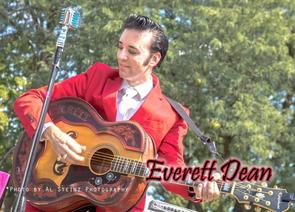 Everett Dean started his music career by winning his first music contest at the age of 12. Since then he has perfected his electrifying style of music. He and his backing group, The Lonesome Hearts, are one of the nation's hottest bands. Everett also serves as the focal point in the Musical Trilogy, The Killer, the King and Cash: A Tribute to the Music of Elvis Presley, Jerry Lee Lewis and Johnny Cash. He also fronts the solo Elvis Tribute show, Elvis: Remembering the King.

He was featured at the Icon Theater in Branson, Missouri in such shows as Jukebox Journey: A history of 50's and 60's rock n' roll show as well as The Rockabilly Kings: A tribute to the Legends of rockabilly music.

As a headliner, Everett has played to capacity crowds in many venues.  In addition to headlining his own shows, Everett has appeared with such nationally and internationally known acts as:

Everett has also recorded two CD's of completely original music.  His first was the Self-titled Everett Dean and his most recent was Honey Poppin' Daddy.  He is also currently working on a third album which promises to be his best ever.