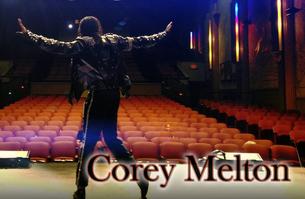 ​Corey is considered one of the world’s top Michael Jackson tribute artists in the world. He was born and raised in St. Louis, MO.  He started singing and dancing at age three, perfecting his craft alongside some of the most elite in show business.  His love of performing and magical energy has helped to amaze audiences of all ages.  "If there is an opportunity to excite and a chance to mesmerize, I’m all over it," says Corey.  "The desire to do those things has led me to my portrayal of Michael Jackson."

​Corey has performed in many venues and under many circumstances over the last 23 years. His father was a club owner who booked the legendary Ike Turner. His mother was a vocalist in one of the hottest bands in town called the Cecil Davis Revue. She did gigs with Smokey Robinson, The Temptations and James Brown. Growing up, Corey had music all around him. Love for music became part of his life and he learned to appreciate various musicians. Years later he still appreciates having the opportunities to team up with some of the best in town to thrill those who seek great entertainment.